We did eventually get passports and photos…scroll down to see the fun we had before achieving this!

The Man and I are going to drive to England in October and stay for a month…and…we decided that the animals, one cat, one dog could come with us Yeah!
‘All we (I) had to do was get them a passport each and then they can travel anywhere in the EU. ‘It’ll be easy,’ I said.

First I bought a carrier for the cat, nothing too small because I don’t want him to have to spend 20hours cramped up.
I read that you could buy a spray and use it in the carrier fifteen minutes before travelling. The last time Mickey had been in the box he was NOT happy. So we duly sprayed the box and drove him twenty minutes to the vet. He only miaowed a little bit on the way so we figured the magic potion worked.
I didn’t stay in the room while Mickey had a chip inserted and two injections one for rabies and one for cat flue. But The Man said he was a star, never made the slightest murmur – once they had prised him out of the box. (Which by the way was too big to sit on the Vet’s examination table).

Jpeg (the dog) had already got the chip and distemper jabs so she only needed the rabies – she was a real wuss and tried to escape the kindly vet’s hypodermic syringe by winding herself around my legs. It’s a wonder I didn’t get the rabies jab.

So everybody ready…now for the passports.

I went to the local hospital in Petritoli on a Saturday morning. On the door, which says VETERINARIO quite clearly there are the opening times. (I’ve written it all in English)

So I called the number because I was there, in front of the door at 9.00 and it was locked and not a soul around.
The conversation went something like this,‘I’m at the hospital, I need two passports for the dog and the cat but there is no one here,’
‘No, it’s closed on Saturday.’
‘But it says open on the door’
‘Oh take no notice of that. Anyway, you need to go round the corner by the church, that’s where the office is. You could try Tuesday at 8 in the morning.’
‘So, Tuesday at 8, right fine thank you.’

I walked around the corner by the church but couldn’t find anything, so assumed I had misunderstood. Tuesday morning I went back to the door which said it was the vet’s door but of course no-one there so I came home and called the office in Fermo, the county town. She gave me the opening hours during the week, I then asked where I should go,

‘Where are you?’ she asked.
‘Petritoli.’ I replied.
‘Ah,’ she said.
The music came on the phone and I waited…

‘Pronto?’ said the voice on the phone (pronto is how they answer the phone – I don’t know why because it means ‘ready’).
It transpired that they had put me through to the Petritoli office.
‘Oh,’ I said, ‘but you’re not open.’
‘We are if you come immediately.’
‘Where ARE you?’ I asked.
‘Come into the hospital, through the main entrance and we’re on the right.’
‘But I’ve just been there, five minutes ago and there’s no one there.’
‘I am here, come now.’

So I did, but the bloody door was closed! I searched and shouted and rang the bell – nothing.
I asked a cleaning lady and she took me by the hand, led me outside, round the corner of the building to an obscure door, I couldn’t see a sign but there must have been one. I entered…
Happiness…she was there, the women I needed, at last I could obtain the passports….Hoorah!

After three quarters of an hour and only 20€ later I had the two pet passports in my hand. We had great fun taking the photos as you can see… 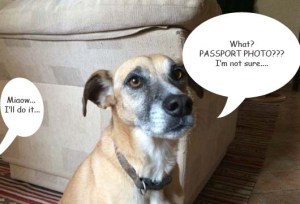 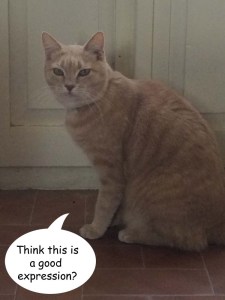 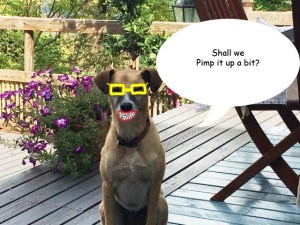