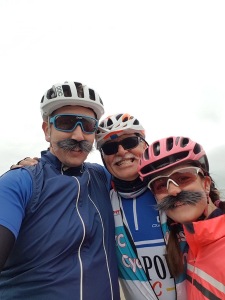 Kelvin, The Man and Lou…someone’s ‘aving a larf!

This wasn’t my first visit to the Isle of Wight, if you remember, we went in August 2016 – for The Man to cycle round it. He went again a few weeks ago so you would have thought he’d had enough but no, he had to do it again. This time it was a team effort with the members of Bridport Cycles. It was the inaugural Kapton Krypton HandiKup IOW. A cycle ride for a club member who has the big C and wanted to set something up for the time when he might not be here. It was decided they should make the first ride in 2017 and that he could participate in his own memorial ride, (which would be a first). Twelve of the riders cycled from Bridport Cycle shop in Symondsbury to Lymington on Friday 13th to catch the ferry.  On Saturday, thirty-two of them cycled around the IOW and then on Sunday, ten cycled back to Dorset and their various homes around the county. A bloody good show I say. The Man did the whole thing and I was very proud of him…around 215 miles in total. I tagged along behind, carrying bags, spare parts and a pump…  One member was lost on the Friday due to mud on the road and a subsequent broken wrist, he bravely cycled on to the half way point of the morning, Ruby’s Cafe in Wool and then cycled home again…What a star. 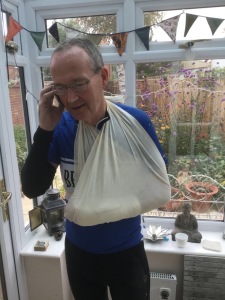 On Saturday evening there was dinner at the Albion Hotel, who, despite very late notice, managed to turn out a scrumptious meal for thirty at a very reasonable cost to all. In fact, they were only given our menu choice at 7.30pm and dinner was served at 8pm. Not bad eh?

I wrote this poem on Saturday afternoon and I’m sharing it with you here.

A couple of Richards, a Tom Dick and Harry,
A Cat and a Bev, don’t think there’s a Sally?
I find it hard to remember the names
And when in their Lycra they all look the same.

They cycled around either clockwise or anti
Some followed their own – modus operandi
Stopping for coffee, tea and for lunch
They really are an eclectic bunch

It wasn’t a race but they wouldn’t be told
Some of them rushing as if going for gold
Others taking time, enjoying the ride
Cutting the corners – I’m on their side

I drove the back-up, following the mob
Well, actually, I wasn’t really sure of my job
I decided at lunch they could manage without me
And retired to my hotel for cake and for tea

Nobody wanted a pill or a plaster,
On the day, there was no major disaster
Surplus to requirement, of me there was no need
So I set about organising the evening feed

We had dinner on Saturday at the Albion Hotel
Which is stuck in the 80s, not a great sell
They did their best with the troublesome lot
I fear, the managers, may have lost the plot

But, prizes were given, people did shout
Others moaned and gave a good pout
But, I hope they all had a jolly good time
And didn’t find it too much of a pantomime!

The photographs are not all mine but I hope nobody minds me using the odd couple that aren’t.