There’s nowhere better than the English countryside in the summer when the weather is good and in Dorset, at the moment, the sun is shining and the breeze is warm. My friend Jan from Bristol, came to stay for a night while The Man was away visiting London including a quick visit to Brand’s Hatch with FMS racing. 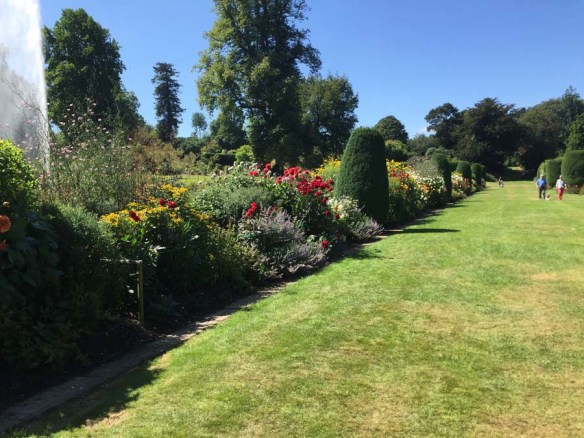 We decided to visit Forde Abbey near Chard, which I’ve been itching to visit since we first arrived in Dorset. Originally a Cistercian monastery and dissolved by order of Henry VIII in 1539, the estate has changed hands many times over the years. The first private owners were the Prideux family in 1649 and the design of the house and gardens have been added to and altered over the years. We took a walk around the impressive gardens commenting on what a pleasure it was to be able to walk on the well groomed grass and appreciate the fantastic herbaceous borders. They were full of multitudinous colours, scents and a variety of flowers too numerous to mention (actually I hadn’t a clue what many of them were, but let’s not go there). I have only recently become interested in plants and flowers as we do have a small but attractive cottage garden with lawn and flower beds. This year has been a bit of a discovery waiting to see what came up but I did plant half a dozen roses, some of which are turning out to be wonderful and a couple that have been drowned out by some enormous perennial dahlias … at least I think that’s what they are. Any gardening tips would be most welcome. 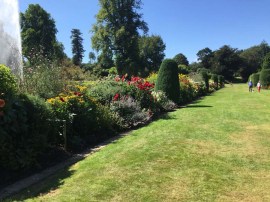 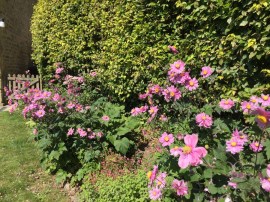 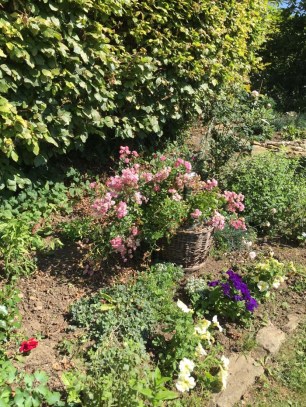 There is something about water that is mesmerising and I love rivers, streams, the sea, in fact water in any form. Strange, because I’m not good in boats and I’m not a great swimmer, I suppose I just love being nearby this basic element. At Forde Abbey we sat for a while by the Long Pond and watched the magnificent Centenary Fountain on Mermaid Lake close by. The fountain was installed in 2005 to celebrate 100 years of ownership by the Roper family. It is the tallest powered fountain in England reaching 150 ft. They don’t have it running permanently but for about fifteen minutes several times a day. 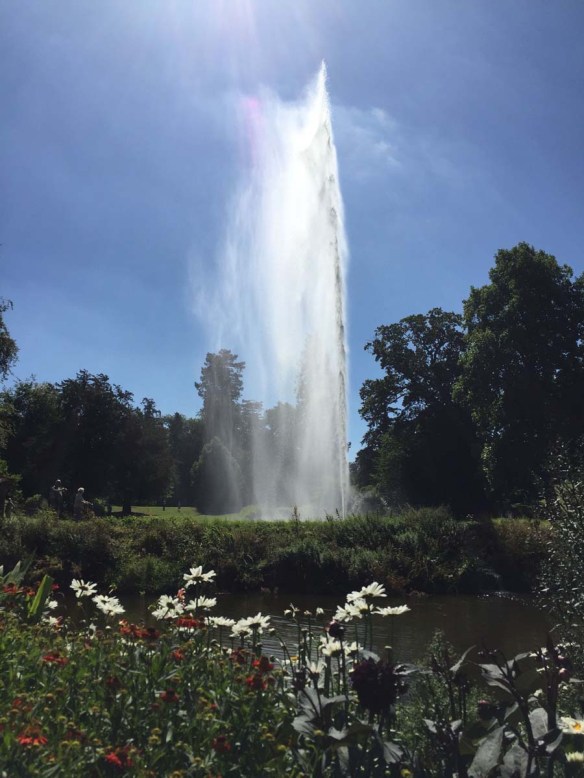 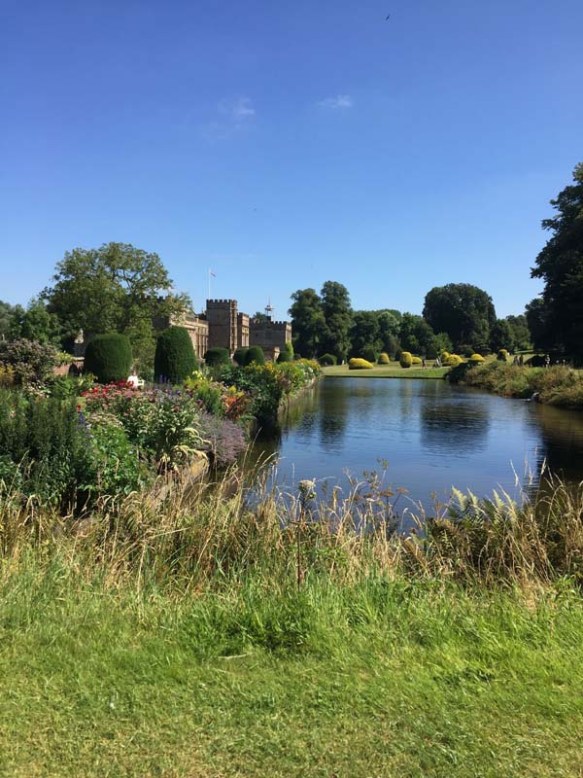 After our tour of the garden we entered the house via the Grand Hall. There was an overwhelming smell of beeswax and carpets, not unpleasant at all but evoking memories of my childhood when I took ballet lessons in an old mansion in Eastcote Middlesex. Forde Abbey is not an enormous house and not at all museum-like, but it does have some great pieces of old furniture and several bedrooms with four poster beds and grand soft furnishings. Jan and I decided we could easily live in the place – for a couple of weeks anyway, but after that it might be a bit difficult just sitting and sewing samplers and not doing the odd job around the house or cooking the meals. Actually Jan said she would be quite happy not having to think of what to cook for dinner every day, but I pointed out that she’d probably still have to think of meal plans but then leave it to someone else to prepare, which would suit me! 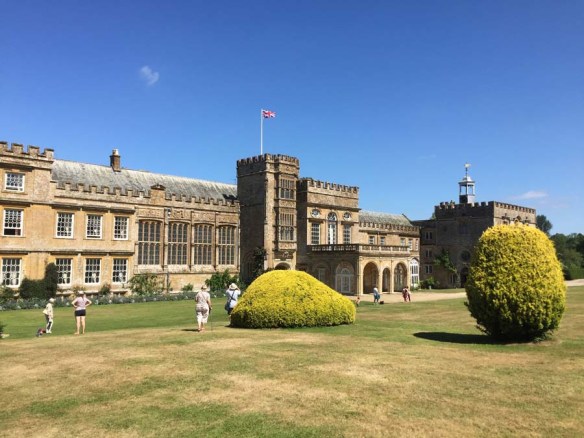 Front of the House

It wasn’t hard to imagine life for the women in the families who had lived in the house in the past. We could visualise them strolling across the lawns with lace parasols keeping their delicate fair skin from burning in the mid afternoon sun. From one smaller bedroom at the back of the house, I could picture a young seventeen-year old girl in the 19th century, sitting on the deep wooden window sill gazing down to the kitchen garden below and eyeing the muscular, tanned figure of a young gardener, possibly stripped to the waist…Mills and Boon here I come! 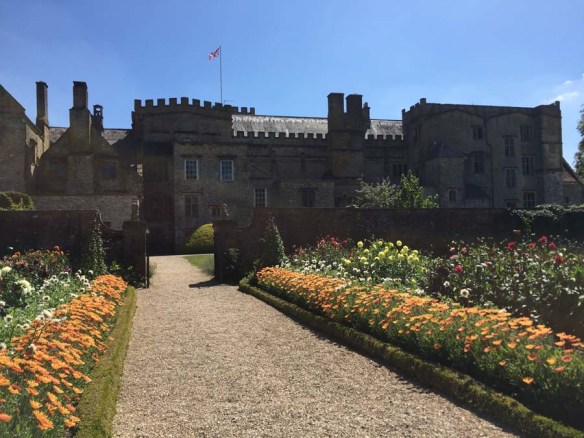 The Kitchen Garden and Back of the House

Forde Abbey has a ‘pick your own’ farm about a mile or so from the main house and grounds so we jumped in our cars and headed off to gather some fruit for jam. Sadly, the strawberries had come to an end but there were plenty of raspberries, if you looked for them.
‘Lots of people don’t bother but if you lift up the branches you’ll find loads underneath’ suggested the girl at the farm shop and she was right. ‘Walk right down to the last two rows’, she added.
It was a fair way to walk but not for hardened pickers like Jan and I who have, for the last few seasons, spent our time in October picking olives. Raspberries are a bit easier and obviously we could just harvest what we wanted with the added bonus of being able to eat them as we went. Definitely something you cannot do with an olive! 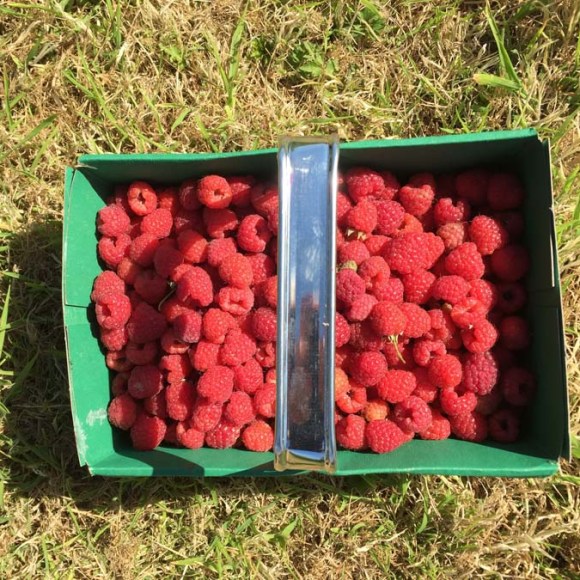 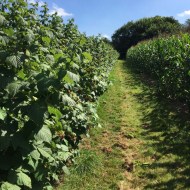 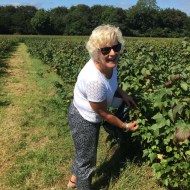 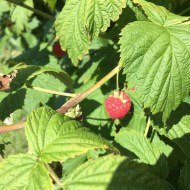 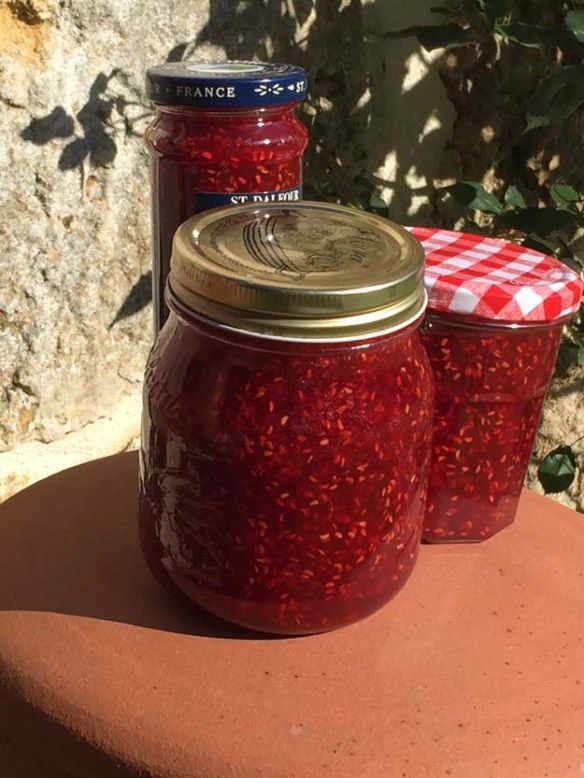 Oops…forgot to mention that we had a lovely lunch in the cafe, at Forde Abbey, jacket potato for me and quiche for Jan with salad…all from kitchen garden.  We looked but sadly we never saw any young, muscular gardeners…I think they keep them hidden from visitors. 😦 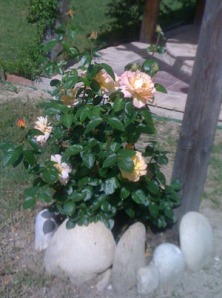 The roses are blooming the grass is growing faster than we can cut it. Summer has definitely arrived in Le Marche. It did have to be dragged out of hiding this year though, April and the beginning of May were very changeable. The kind of weather where you have to prepare for anything and everything before you go out for the day, taking with you, raincoat, umbrella, wellies, cardigan, T-shirt, sandals, suncream and sunhat. Get the idea?

Last week I mentioned the growth in the orto (vegetable garden) and it hasn’t slowed down. Today we’re going to pick most of the peas and broad beans, although the beans don’t look too healthy, some of them have black leaves and inside the pods is a sticky black substance…anyone enlighten me? 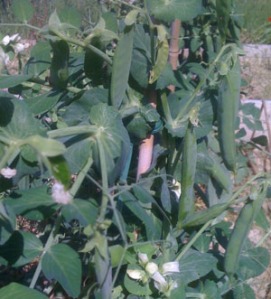 Peas…as if you didn’t know

In 2012 the apricots were prolific but, this year, two of the trees appear to be yielding nothing and the other tree just a few. I managed to make over thirty pots of chutney and several jars of jam last summer but this year there will be very few. Pity I gave so many away. Looks like there’s only one of each left in the larder. 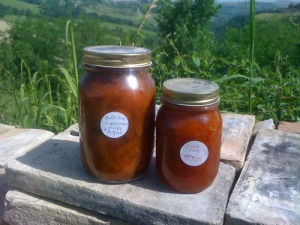 The cherries are looking good though so we’ll be harvesting them this afternoon too before the birds get them. So cherry jam will be on the boil later this evening. Such a fag taking out all those stones though. 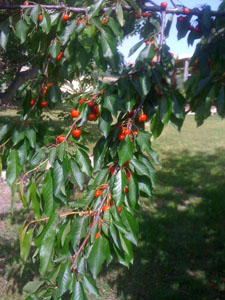 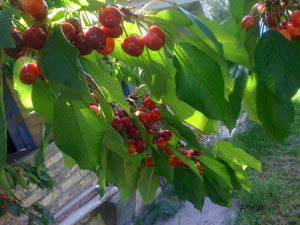 May is a very beautiful time here, it’s warm enough to eat breakfast outside on the terrace but not so hot during the day to be unbearable. The mosquitoes are still sleeping so we don’t have to cover ourselves in deet. The evenings are drawing out and only goes a little chilly after the sun has completely gone, which, at the moment is around 20.45. 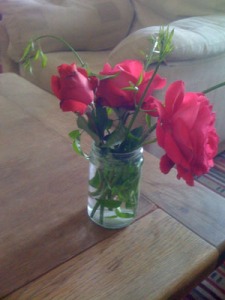 If you fancy trying out Le Marche there are some lovely places to visit and to stay. You could check out this link Marcheholidayaparts.com. If you decide to try them then mention olivespastavino blog when you book, you will be sure to get a favourable rate! 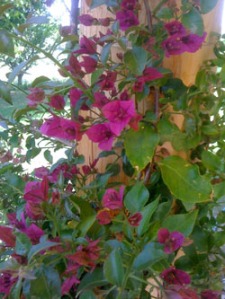 The Bougainvillea has survived the winter and is blooming!