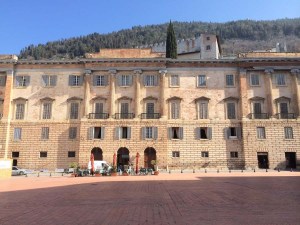 Our Hotel in front of the main square

The Man and I were feeling a tad fed up so we thought we would spend a couple of nights in one of our favourite Italian towns – Gubbio. If you remember we visited there last year and were pretty impressed and promised that we would return. We had hoped to go back in June 2014 but it didn’t happen so this June (2015), finding ourselves in need of a little R&R we toddled off in the VW Polo just after lunch on a rather miserable Wednesday last week. Jpeg and Mickey (the dog and the cat respectively – you should all know them by now) were given strict instructions to behave themselves while we were away, Jpeg was left in charge – it was her turn. A kind neighbour was going to pop in several times over the two days to deal with food and exercise etc.,

Oh the freedom of the open road and no responsibilities – for a short while anyway – it recharges the batteries like nothing else can. By the time we arrived the clouds had cleared away revealing blue skies and a warm evening. 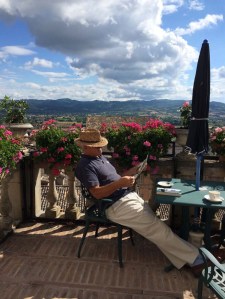 The Man Relaxing with a cuppa after a two and a half hour drive – By the way, I did the driving!

Our choice of hotel was the Relais Ducale – same as last time but a better room than before – a suite no less and with a the private terrace with stunning view. If you’re going to stay in a hotel for a couple of nights for a break then I think it’s a good idea to go for the best. 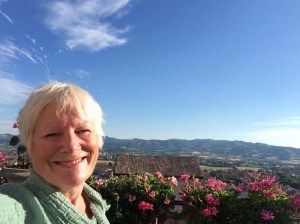 View from Terrace and Me!

The first evening we went to the Taverno Del Lupo restaurant, we’d visited it before and found the ambience pleasing, if a little old fashioned and the food excellent. We were not disappointed for our second visit. The lamb was as good as ever. 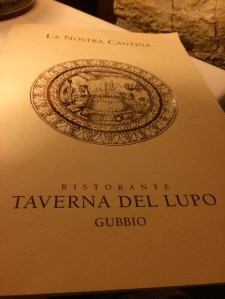 During the day on Thursday we took in the town, it doesn’t take long – beautiful architecture and The Man has a fascination with the doors – which meant I had to take lots of ‘door photos’ with my iPhone as The Man doesn’t have a camera and has an old fashioned brick for a mobile – which by the way he never carries on him! 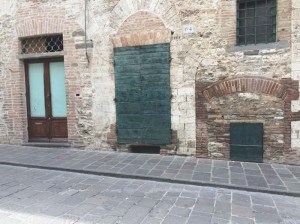 A selection of Doors – Interesting – maybe 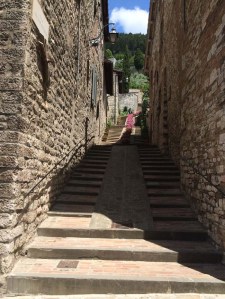 Beautiful little Alleyway with Flower pot in the centre 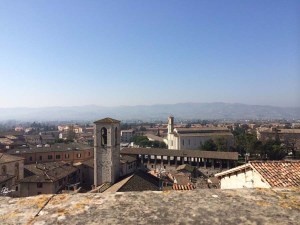 The view from the main piazza looking down over the town and into the distance.

Gubbio has a Funivia – a cable way is the direct translation but one could expect a cable car or chair lift. What this is actually is a cage which holds two people and maybe a child but you have to stand up. We watched the ‘cages’ coming down and round and there seemed no time at all to get on or off. We agreed to give it a miss this time and save it for the next. I’m not good on those sorts of things but know that I must do it sometime. I blamed the windy weather this time, not the sort of thing to do in a force 10. (Sorry no photo but you can google it to see one!) 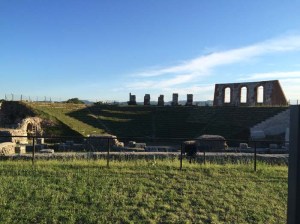 Our second night found us wandering around and leaving the city walls for a look at the Roman theatre. There’s not much of it left but enough to imagine a few Roman actors strutting their stuff.

On our way back up to the town we came across a restaurant we’d not seen before – it was the Officina dei Sapori (Workshop of Flavours although I prefer to translate it as the Flavour Garage). It was a real find. We were treated well, shown our seats and immediately given a glass of sparkling rosé and the menu card, which reminded me of an old telephone numbers pad we had in leather when I was a kid. You run your finger down the index and flip up the course you wanted to see – interesting. 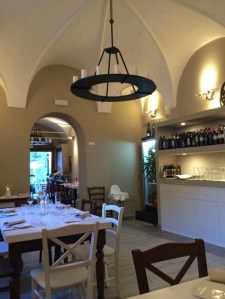 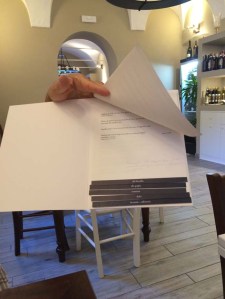 We are spoilt for local restaurants back in Petritoli but this had just that something different. Modern décor, unusual menu, good food and excellent service. Three courses and wine (which was organic) for a total of 67 euro. Wonderful – we’ll be visiting there again! Although not many people were there when we arrived at an early 7.30pm by the time we left they were queuing for tables.

On Friday morning we made our way back to Petritoli but made a stop in Jesi something The Man had wanted to do for a long while. I’ll blog about that next week but here’s a photo for a taster. 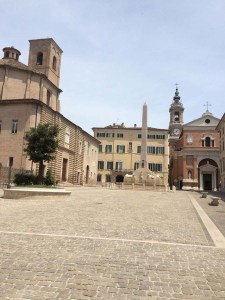 Jesi – Anyone know the name of the square?